An Introduction into Links Golf in Scotland

Let’s start with clarifying the origins of the term “Links Golf”.
“The Links” isn’t a term specific to golf courses; it is simply a strip of generally undulating, sandy terrain linking the sea and the arable farmland around the coastal fringes of the British Isles. The types of grasses (browntop bent and red fescue) associated with these stretches of land also typify the terrain on which Links Golf is played. This is where the game of golf has it’s origins in the British Isles, particularly in Scotland which is where the game was first played. Together, the soil and grasses result in the firm turf associated with Links Courses and the ‘running’ game.

The hard surface typical of a Links Style course allows balls to “run out” much further than they would when landing on the fairway of a softer turf parkland or heathland course. Often players will land the ball well before the green and allow it to run up onto the green rather than landing it on the green in the more targeted-landing style used on the softer turf experienced on inland courses. In addition, the windswept conditions, which are often a feature of Links Golf, make it a true test for even the best golfers.

The fairways and greens on Links Golf in Scotland tend to be far more undulating than those on Parkland Courses. Also, the ground is much harder (due to the underlying sand drying quickly) and, although this allows the ball to travel further from the tee, the fairways are far less forgiving. The rough areas are thicker than your typical parkland course and the fairways are tight.

Usually, links have very firm greens, which makes stopping the ball difficult. This, coupled, with the gusty conditions, means the usual method of dropping an approach onto the putting surface from a great height is less effective. The canny links golfer will pitch their low trajectory approaches short of the green and roll them on to the putting surface.

Links Golf in Scotland has stood the test of time, they are the courses where golf was invented and they make constant demands on a player’s skill and imagination.
In short, Links Courses are, and they remain, the ultimate test of a player’s golfing ability.

Let us help you grind out a score! 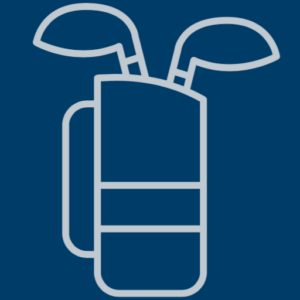